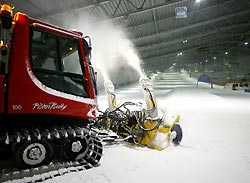 Ski Halls is absolutely the new trend nowadays. In the recent years ski halls became especially popular in the regions situated far from the mountains and with people who want to ski and snowboard even in summer. Ski halls are also popular with people for whom it is also not always possible to make a journey to the Alpine regions. Ski halls are also the rescue for the ski with the stigma of “distant Birth” – the regions situated away from the snow mountains.

Manmade snow covers the sloping floors of the closed Ski Halls. Skiing and snowboarding are here all year round. The German ski halls are distributed across the country. They are particularly successful and situated close to the big cities. The famous German ski halls are situated in Neuss (all year round winter world, Jever Ski Hall Neuss), Bottrop (Alpine Centre Bottrop), Senftenberg (Snowtropolis Senftenberg), Wittenburg (Snow Funpark Wittenburg) and Bispingen (Sno Fun Park Bispingen). The remaining space can be German indoor ski but refrain – the Swiss and the Austrians have enough opportunities for skiing to your mountains.

Ski Halls are built not only in Germany. In the European context, particularly the halls of the Benelux countries should be mentioned. it seems it is here there are many ski admirers. But in Spain also they can ski in summer far away from the mountains. Thus, the largest ski hall in Spain is situated in Xanadu Shopping Centre.

Skiing in the Desert

It is rather exotic to see the ski halls in the desert. There is a ski hall (Dubai Skiing) right in the centre of Dubai. In Abu Dhabi one can also ski during hot summer months (Snow World Abu Dhabi situated in the Marina Mall). Meanwhile, China is also in the range of modern Ski Halls in big cities: skiing is possible in Chinese Shanghai and the Olympic city Beijing.

Europe also plans building more ski halls. I.e. some of the Russian oil millions should be invested into a world’s largest ski hall building. It will be placed in the Russian Ryazan that is situated in 200 km to the south from Moscow. The gigantic construction should have a large hall like a ski hall in Bispingen, for instance, which is about 100 meters wide without pillars that are sufficient. However, the ski hall in Ryazan should double the proportions of Bispingen.

Skiurlaub-infos.com presents some of the big ski halls.