Finnish ski resorts are waiting for the Russian influx 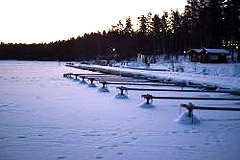 Thousands of Russians will spend New Year in Finland

Ski resorts of Finland during the first days of the New Year are waiting for the mass arrival of tourists from Russia. According to some Finnish media, in particular Helsingin Sanomat, during the period from 2 to 4 of January, 2012 the border between Russia and Finland in both directions will be crossed daily by 50 000 tourists.

At present Finland enjoys consistently high demand among the Russian tourists. Such resorts as Ruka, Rovaniemi, Imatra and others are every year occupied by thousands of Russian citizens.

To ensure effective communication between the two countries transport infrastructure is being constantly upgraded. Among recent successes is high-speed train Allegro, which allows getting from Helsinki to St. Petersburg in 3.5 hours. As noted by the barentsobserver.com site, for the first year of its existence Allegro transported about 280 000 passengers.

The high level of demand for holidays in Finland is backed by the data of the Finnish Visa Application Centre in St. Petersburg. It is expected that for 2011 the number of issued visas at the application center will be over one million.

According to the Office of Tourism Development of Finland it is expected that the number of people willing to spend New Year vacation in Finland in the first month of 2012 will be from 300 to 350 thousand people.

It should be noted that not only ski vacations and proximity to the Russian border caused increased demand in Finland. Christmas sales season is another Finland’s positive argument when selecting a place for the Christmas holidays. This season sales season in Finland was launched on December 27, 2011. It is expected that discounts during the sales season will be 70% of the original cost. The role of one of the most popular shopping centers in Finland for many years belongs to the border town of Lappeenranta.